Marthe Razafindravelo remembers when farming was almost more trouble than it was worth. The work was arduous, the free market seemed hostile to homestead sellers, and if she wasn’t getting figuratively robbed by cunning buyers, she was getting literally robbed by thieves.

Life was never particularly easy for Marthe, but when her husband was still alive, things were relatively stable. When he died six years ago, however, the newly-widowed 62-year-old had few options.
“Life was really hard after my husband died,” she said. “When he passed away, I moved in Sahave because the cost of living was higher in town. One of my daughters already had a house here, and so I lived with her.”

The widow scraped a living from the hard soil, but life remained difficult. One day, Marthe met several women carrying crops and speaking about the farmer association to which they belonged.
“I asked the women: ‘are they any criteria for joining this project?’” she recalled. “They said no, and I so attended each ASOTRY training.”

First, the grandmother learned from the Farmer Field School how to plant, water, and harvest properly. She began to grow cassava and peanuts and beans in record numbers. Then, she learned from her Farmer Business Association (FBA) how better to sell her crops. Her income began to climb.
And now, thanks to the recently built Agriculture Collection Center (ACC),
Marthe has a safe place to store her crops from thieves, pests, and market lulls.

“Now I don’t keep my crops in my house any longer. I store all my crops in the center,” she said. “Also, before I had to look for buyers on my own. I had to go to villages to find buyers for the small products that I had. Now I am not worried about finding buyers, because it is the association that
searches for buyers.”

Because the Agricultural Collecting Center represents 200 farmers in four different Farmers Business Associations, the days of selling piecemeal at low prices are over.
“Now there is unity and solidarity between us,” said Agricultural Collecting Center president Jean Baptiste. “Before, we just did everything on our own. Now that we sell our crops in groups, we can sell the rice at higher prices. Before, if the price in the market was 150 ariary per 300 grams, we were forced to sell. This year, we can sell our rice at 260 ariary per 300 grams.” 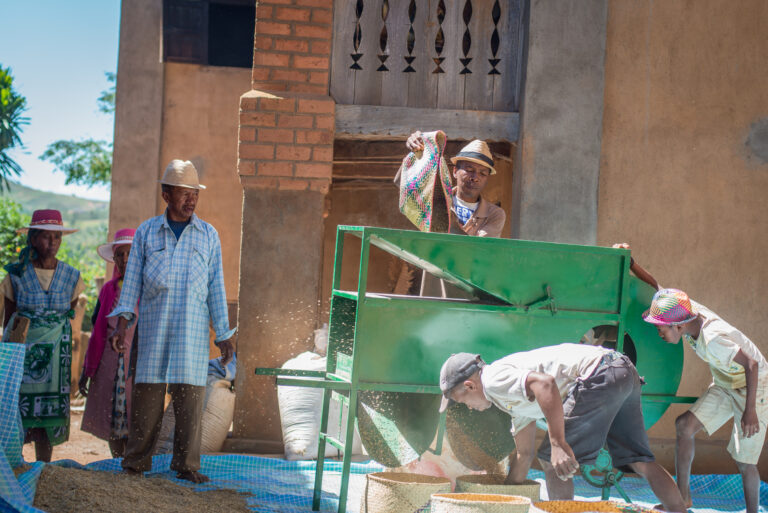 Because the farmers lacked a safe way to store crops long term, they were forced to sell immediately after harvest, along with everyone else in the market. As the crops inundated the market, prices plummeted.
Thanks to the Agricultural Collecting Center, members can harvest their rice in May and sell in November, when the price is high again. Last year, rice farmers of the Agricultural Collecting Center of Sahave shared more than one million ariary in profit.

And because the unified farmers represent crops in bulk, they are attracting wholesalers willing to come purchase everything at once.
“We choose between the potential buyers, then we sell in bulk to the one who offers the best price,” Jean Baptiste said. “We have a really good reputation among the buyers now. Now it is no longer us who look for buyers, it is them who look for us. We have the luxury to choose our favorite.”

Marthe feels the difference. Now she has her own house, and enough food and money to get her through the worst of times.
“I thank God that the project came here,” she said. “Life at home is much better. Even though I am a widow, my life is stable now. I think if everybody applies what the project teaches, their lives will be better as well.”

“I think my husband would be proud of me and the great change in my life,” she added. “I am not rich, but life is stable.”