Villagers and Their Road

Chief Daniel estimates that more than 1,000 people use the roads outside his lowland village of Ankazofady, in Ambohimandroso Commune. Children walk to school, ranchers herd their cows, farmers harvest and transport crops, and mothers go to town to shop.

When the weather is good and the roads are dry, the few kilometers that separate Ankazofady from the next town are easy to navigate. During the rainy season of December to February, however, the roads flood, bridges wash out, and all access is cut off. For these few, disastrous months, nobody uses the roads.

“When flooding occurred, the community had no more access to facilities,” said Clovis, the ASOTRY Road User Association (RUA) President. “The children could not go to school, the farmers could not transport their crops to the market, the community could not go to other villages.” Worse than the inability to transport crops was the inability even to access crops. During the worst of the rains, roads in Ankazofady were so bad that farmers could not make the short journey from their homes to their fields.

Crops were left to ripen in the field and die. “Before, the crops stayed in the field for about one month too long and by the time we could get to the crops they were already destroyed,” Clovis said.
Daniel remembers his own misfortunes before ASOTRY brought road repair and maintenance tools and skills to his people.

“Before ASOTRY, my crops were destroyed and the cattle were suffering from shortage of food during the flooding,” he said. “When he was on the road to school, one of my sons even fell in the water and all his school
supplies were dumped in and lost.”

When ASOTRY Field Agents came to Ankazofady, they brought the knowledge and resources necessary to make the roads passable all year. Clovis and the members of his RUA learned to level the road down to the bedrock, bevel it for runoff, and widen it to 5 meters and 70 centimeters. 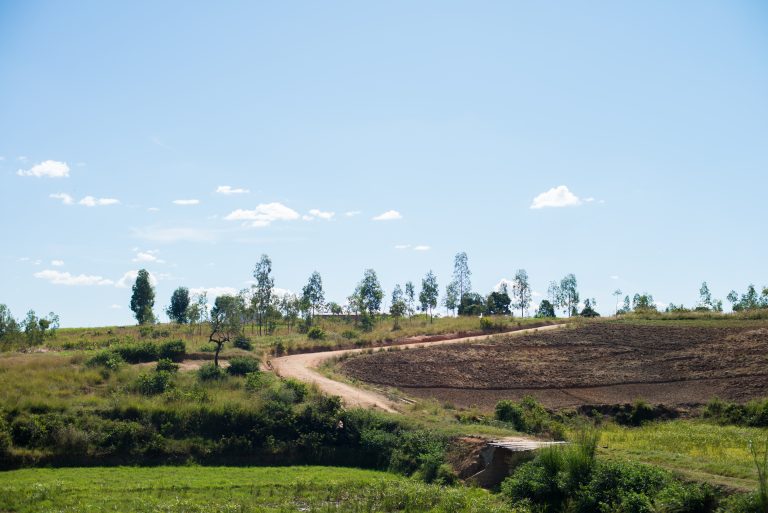 Additionally, they learned how to build up an embankment, dig out drainage ditches every three meters, and build and repair small bridges.
“ASOTRY gave us practical training on the roads,” he said. “Before, when we repaired the road, we just filled in the potholes.” Now, the members of the RUA dedicate two days every year for maintenance—one in November before the rains, and one in February after—and additional days on an as-needed basis.

“Before the rains come, we clear the road and the surroundings and all the villagers participate with the association,” Chief Daniel said. “The community members also contribute money which we will keep later when we need to do repairs. For example: if the bridge is broken and we need to buy cement, we will repair it with the money people have contributed.”

Because of the hard work of Clovis, Daniel, and all the villagers who commute here, the road is now in pristine condition. Thanks to the knowledge and resources from ASOTRY, it will remain that way. “I thank the project for their good partnership with our community,” Daniel said. “Thanks to the road, we can overcome some of our challenges.”