It was still early afternoon, and Viviane Razafindranoro had already conducted a weight and arm measurement with 30 children between the ages of 24 and 59 months and had trained their mothers on the topic of malaria treatment and prevention.

For the Community Health Volunteer (CHV) of Akondro, in Ambalakely Commune, a day like this is typical. “I received trainings and my role is to share these trainings with the community,” Viviane said. “It is important for this community because there is no health center here. They don’t know anything about it.”

The vacuum of knowledge which she continues to fill includes awareness-raising and trainings on all aspects of community health: vaccinations, nutrition, preventable diseases, use of latrines, handwashing, water treatment, and any other health topic relevant to the needs of the community.

“The community members really apply the messages,” she said. “For example, all of the kids are vaccinated now, which was not the case before ASOTRY. The mothers used to think the vaccines would make their kids sick, but now they are willing to do all the vaccines.
“I always encourage them to continue because people forget sometimes,” she added. “But they always follow the messages.” 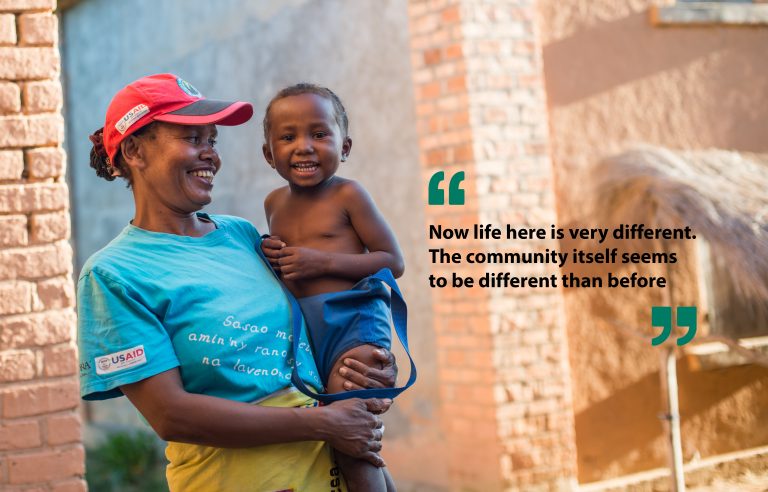 Community health messages are made available as needed—to the extent that community members will drop by her house unannounced seeking advice—but the typical structure follows a four-week schedule: week one is dedicated to infants under six months; week two for infants 6-12 months, week three for babies 12-23 months, and the last week for toddlers 24-59 months, and all others who missed their assigned week.

Though each week offers age-appropriate messaging—encouraging mothers of infants under six months to continue breastfeeding, for example—all four groups have in common weighing and measurements, and continued home visits to assess and encourage the mothers.

The role is one that Viviane takes seriously.
“If ASOTRY wasn’t here, they wouldn’t be able to access any health care,” she said. “They wouldn’t know anything about health, and their health would be poor. Malnutrition and diseases would prevail in the community.”

Though she has worked as a Community Health Volunteer for the local government and other NGOs—it is why she was appointed by her community again—she is most active and proud as an ASOTRY health worker.

“I have been working a lot with ASOTRY, compared to when I was a Community Health Volunteer before,” she said. “ASOTRY has done a lot of good, and the changes are significant. There haven’t been any major epidemics in this area, whereas before we had outbreaks of cholera.”

“I am thankful for the project and for the American people who helped implement this project,” she continued. “Now life here is very different. The community itself seems to be different than before.”